FFFC supported the Scottish Charity 'Safe Strong and Free,' who are based in Inverness, in the making of a video aimed at preventing/detecting child abuse. Although the video is intended for use in the Scottish Highlands, it has resonance throughout Britain and Ireland as the message it gives is universal.
Safe Strong and Free video on youtube

FFFC (The Foresters' Fund for Children) and their corporate partner, Vision Publication Group, are pleased to be to be jointly sponsoring a paving brick on the Richard House 'Path of Life', which is one of the many Richard House Children's Hospice fundraising initiatives.

Our brick will be laid in April. 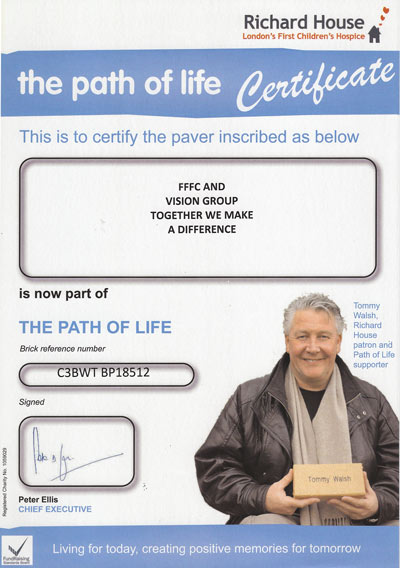 Richard House has been supporting families whose children and young people have life limiting/life threatening and complex healthcare conditions for more than 12 years. Richard House currently supports around 300 families, accompanying them during the child or young person's journey through life to death, creating positive experiences along the way which become good memories for the future.

FFFC Chairman, Tom Ball, travelled to London to see for himself the work done by Richard House.

'I was so impressed,' he said. 'To see this was inspirational. It is so obvious that the dedication and care provided by all involved at Richard House is of so much benefit to those children and their families in their community who are in need of the services and support that Richard House can give. We are more than pleased to now be a part of this.

FFFC and Vision are so grateful to our donors and advertisers who make it possible for us to help such organisations as Richard House. We hope that, with the continued participation of our supporters and advertisers in our fundraising, we will be able to give further help in the future'. 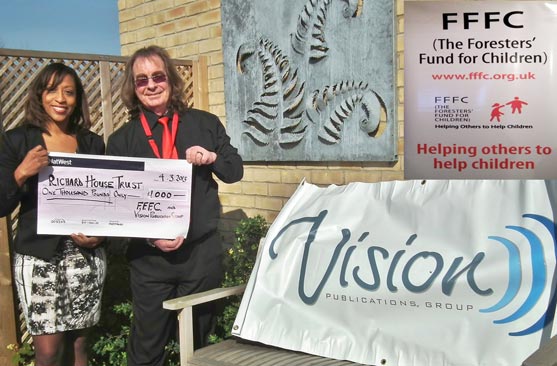 The picture above shows FFFC Chairman, Tom Ball presenting our cheque to Karen Duncan of Richard House Children's Hospice. If you would like to know more about the work of Richard House, go to their website http://richardhouse.org.uk

Your generosity has also made life better for many other children, as you can see at 'We have helped'

This donation has only been possible thanks to the direct support of contributors to FFFC, and also to the continued and very valuable support of the advertisers to our magazine, published for us by Vision Publication Group.

The Children's Hospital is part of Sheffield Children's NHS foundation Trust. It's one of only four of its kind in the whole country – it's just for kids and has a whole range of specialist services that make it different from most hospitals.

Over 245,000 patient journeys are made to this hospital from all over the UK and beyond every year.

Tom Ball, the Chairman of FFFC, visited the Sheffield site. He said:
'The work that this hospital does is so varied. It is clear that the services provided by The Children's Hospital Charity complements the NHS side of the organisation and really assists in making the children's time there so much easier and manageable. It has been a privilege to see this at work'.

Tom presented a cheque for Ł1000 on behalf of FFFC and Vision. The picture below shows Rebecca Lawson and Tonya Kennedy of The Children's Hospital Charity receiving the cheque from Tom. 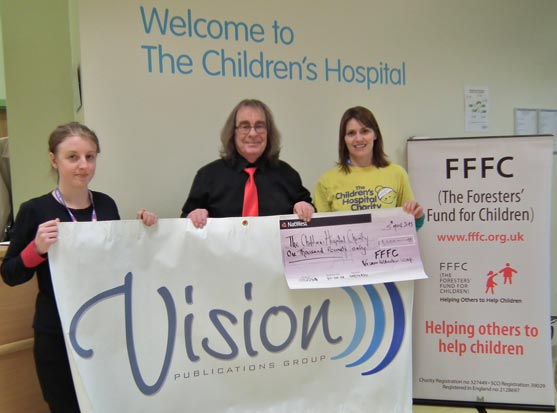 Your generosity has also made life better for many other children, as you can see at 'We have helped'

Donation to the Children's Medical and Research Foundation

The FFFC and our corporate participants Vision are pleased to have made a donation to the Children's Medical and Research Foundation at Our Lady's Children's Hospital in Crumlin. The money will be used towards research into childhood cancers and we are proud to be able to assist the hospital in the fantastic work they do for poorly children throughout the Republic of Ireland.